A ‘jet drive’ in the marine industry is a water pump that generates a high speed jet of water which is ejected through a nozzle that has directional control for steering. This creates a thrust force pushing the vessel forward as a propeller would do. There is also a ‘bucket’ which deflects the jet of water to move the vessel aft, and in combination with the directional nozzle, port and starboard.

The jet of water is created by an inboard engine turning a drive shaft which an impeller is mounted to. This impeller takes water from underneath the hull, and forces it out through the nozzle. The two inboard engines we have on CRC Galaxy for example are 435 horse power each and reach 3,500 revolutions per minute. With up to 6 blades on the impeller, that makes for a powerful drive system!

The controllable bucket provides very responsive steering and if you have two jet drives on one vessel as we do, you can use the drives independently of one another, creating an extremely manoeuvrable vessel which turns 360 degrees on its own axis. This is vital for us when tasked on work sites confined in space.

Commercial Rib Charter cater for a wide range of tasks including Crew Transfer, Safety and Support roles, Crew Transfer and Diving operations. A large part of this work is carried out in shallow water which is where the jet units comes into their own. Compared to a vessel using propellers, a jet powered vessel requires much less water under the hull to operate safely, meaning we can offer our services to a wider range of contracts.

The reason for this is the jet intake and nozzle sit flush with the bottom of the hull meaning no under hull obstructions. If for any reason one of our vessels were to touch the seabed, we aren’t going to damage the prop or outdrive which you would almost definitely do if using a conventional propeller drive. 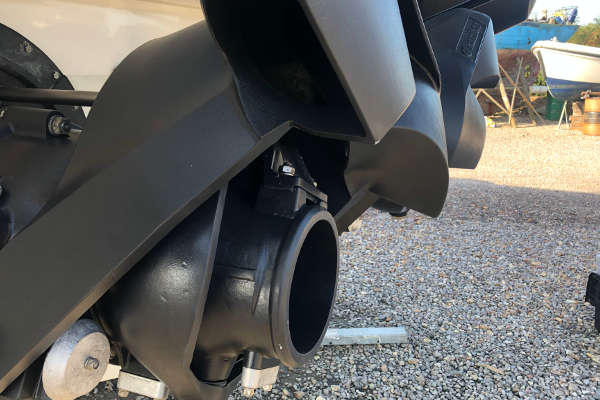 So which jet unit do we use?

We thought we would explain why we have opted for HamiltonJets on some of our bigger vessels such as CRC Voyager, CRC Galaxy & CRC Tempest. Commercial Rib Charter are always keen to ensure our vessels are fitted with the most current and state of the art equipment ensuring that our Ribs operate to their full potential, being the main reason why we opted for HamiltonJets.

We fit HamiltonJet units to our vessels as they can be setup with a ‘Blue Arrow’ control system for enhanced manoeuvrability. Unlike the usual way of steering a jet vessel with both steering controls and bucket controls requiring multiple movements and adjustments in a confined space, the Blue Arrow system combines all of these inputs into one single action.

The blue arrow unit if pushed over to one side, is essentially asking the boat to be moved sideways whilst keeping its current heading. The unit will work out the angle of the steering required, and the position of each individual bucket, whether it be shooting the waterjet forward or aft.

This removes a lot of work from the skipper when manoeuvring the boat in a tight space, potentially in a choppy sea. Having this available to our skippers is exactly what we need.

So you want to be a Skipper with Commercial Rib Charter? →
← Engine Change