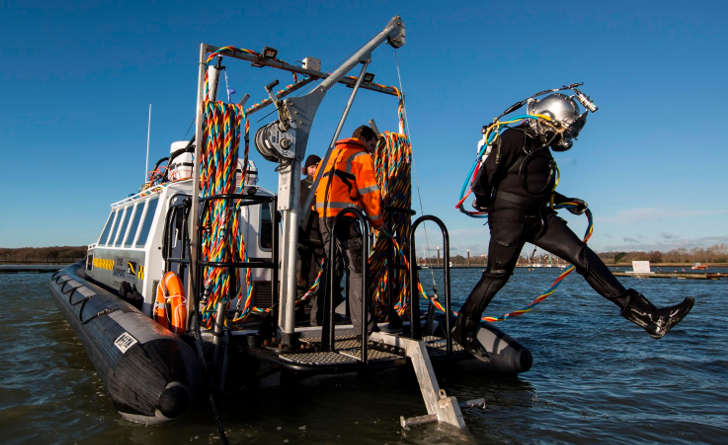 During the Second World War, between September 1940 and May 1941, London, Southampton and other cities with key ports and industrial areas were heavily and frequently bombed by the German Luftwaffe , this was known as ‘The Blitz’.

30,000 tonnes of ordnance were dropped overall during this period, one in every ten bombs dropped was a ‘dud’ which means it didn’t explode on impact, its these dud bombs that has resulted in thousands of UXO’s still being found to this day.

This is where CRC play a crucial role in assisting with subsea surveys for UXO all along the UK coastline, the River Thames and in other areas of Europe.

Commercial Rib Charter vessels are not only mobilised to assist with the location of UXOs by means of magnetometer survey but we also assist with either the recovery, or disposal of the targets. Divers will get deployed from a CRC vessel to dive down to the target and carefully assess the target on the seabed.  It’s at this stage that the dive team decide if the target can be disposed of in situ,  if it needs to be moved to a more secluded location prior to disposal, or if it can be recovered to the surface and given to a land based bomb-disposal team.

UXO is often found in shallow waters, this is an area CRC specialise in with a fleet of shallow draft vessels.

With such a wide range of RIBs and Catamarans, we are able to provide and operate boats to fit with all of your project requirements. Our vessels are fully road transportable so can be anywhere in the UK within 24hrs, or anywhere across Europe with very little delay to your project.