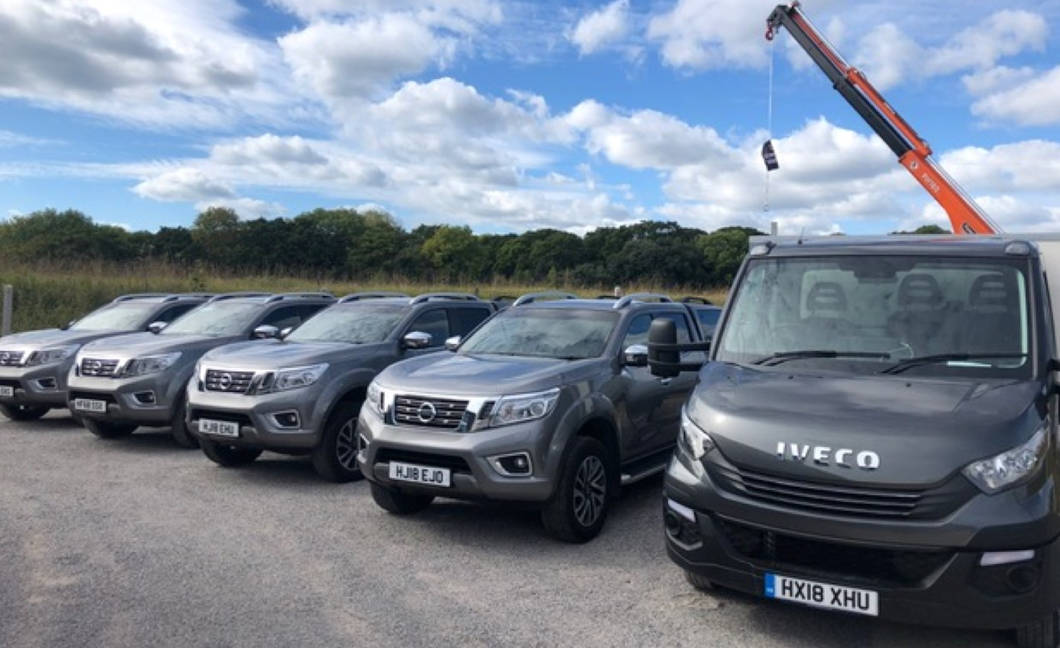 At Commercial Rib Charter we have recently renewed our fleet of tow vehicles.

Whilst our larger vessels are all moved by low loading articulated lorries our smaller Ribs can be moved by 4×4’s on trailers, in addition we also have a fleet of flatbed trailers and box trailers that are used for moving equipment and pontoons.

We put high mileage on our tow vehicles which move around the country often with a heavy boat in tow.  Our vehicles need to be well built, reliable, comfortable and fuel efficient.

For over 15 years CRC have operated a fleet of Toyota Hilux’s.  Models have changed over the years with various introductions, usually extras that should make them more appealing to the leisure buyer.

Larger engines and automatic gearboxes have become available, nice interiors with AC and leather have also been on list of optional extras.  Toyota and most other brands have continually developed their pick-ups to attract buyers where the vehicles are less and less likely to end up actually working, and probably more likely to be doing the school run.

Our vehicles are changed every 3 to 5 years depending on mileage and  warranty expiry.  Usually with circa 75,000 miles on the clocks we let them go, they have been looked after well with a full dealer service history and properly maintained so we usually get a fair price for our second hand vehicles.

We always replace the fleet at the same time so we are usually looking at buying between 3 and 6 vehicles in a single transaction.  We always check the market and test drive the current range of pick-ups on the market but time and time again we end up buying the trustworthy Toyota Hilux.  In later years we have been buying the Invincible model with a 3 litre engine and automatic gearbox.  These have been superb with great pulling power, smart understated looks, comfortable and smart interiors and give a reasonable return on fuel.

We have had the luxury of dealing with Toyota UK as ‘trade buyers’ who have been superb, although we actually pay and receive the vehicles from a Toyota dealership, unfortunately the dealership were less helpful.  Luckily we don’t really have to deal with them though other than servicing as the trucks literally never go wrong.

Earlier this year, the time had come to replace the current Hilux’s.  Toyota kindly sent us a demo vehicle with a tow bar for a couple of days.  First impressions were not good.  Whilst we were not over keen on the new exterior look it wasn’t too bad, although the higher specification that we wanted had impractical matt black wheels, nasty ‘Hilux’ branding on the back and some other nasty chrome bits thrown onto it.  Being a work vehicle looks are not too important so this was cast aside, as long as it delivered on what it needed to do then we would buy them.

Unfortunately, whilst the Toyota blurb states a higher torque than the previous model we almost found this impossible to believe.  Towing our boats which are about 2000kg’s proved to be a real issue for the truck.  The gearbox seemed to add to the problem which just seems to ‘stick’ in one gear when pulling hard, and usually it was the wrong one.

Where did this leave us?.  Well, sadly, we decided the Hilux wouldn’t work for us.  We desperately hope that there will be a mid-life face lift to the Hilux and that they may introduce a larger engine too.  Until then, we had to look for something else.

We tested the VW (Amorok both engine sizes), Ford Ranger (both engine sizes) and the Nissan Navara.  Consideration was given to the usual factors, fuel burn, cost, looks, comfort, warranty and overall practicality.

The VW V6 was probably the nicest vehicle but was difficult to justify in terms of cost.  The smaller engine VW was nice but rumours were also present regarding a new model coming to the market within a year, nobody wants to buy a new vehicle when a new model might pop up within a few months so the VW was removed from the list.

The Ford was nice but we felt very noisy, equally the interior of the higher spec ‘Wildtrack’ model was bright orange which isn’t our style.  Over all it just felt very ‘plastic’.

Finally we tested the new Nissan Navara.  Whilst they have had their issues with breaking chassis on the previous model we didn’t exclude them from the outset and following a thorough test it quickly started ticking boxes.

The overall look is quite ‘low key’ with no bling chrome and some good colours to choose from.  The top of the range model came with leather, electric driver’s seat, 360 degree cameras and so on.  Nissan also offer all of the extras such as hard tops fitted by Nissan.  The engine, whilst smaller than the 3 litre Hilux’s we were selling performed well, as did the gearbox.

The final decision was the warranty, Nissan offering a 100,000 mile 5 year warranty sold us on them.  We ordered 4 identical vehicles to start with and have been delighted with them. 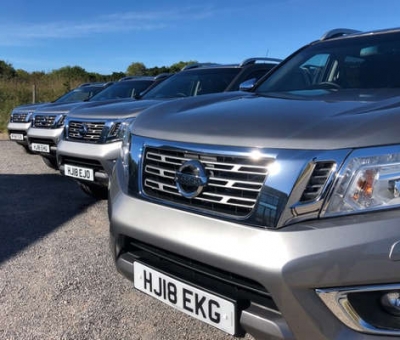 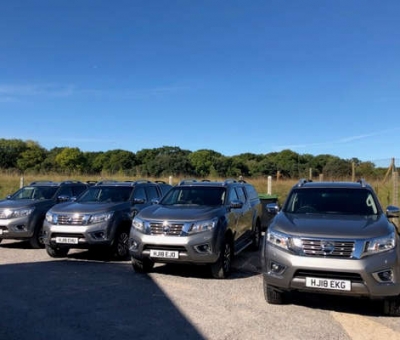 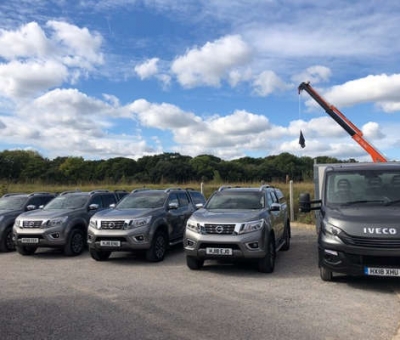 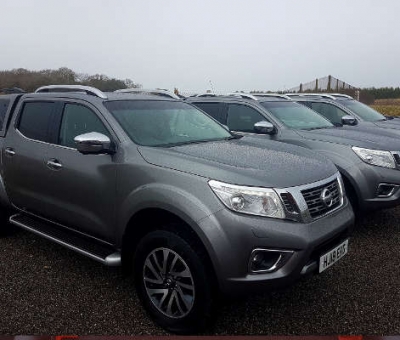 We have had a small issue with front windows and the electric motors slowing down.  This has been resolved under warranty with them literally just lubricating mechanisms which has solved the problems.  Overall we have been delighted with the new trucks.

Our advice to any buyers looking for ‘working trucks’ rather than a school delivery vehicle would be to try them all out, equally if you are planning to tow with them make sure you get a test vehicle with a tow bar, we were amazed how almost all of the dealers struggled to offer us this.